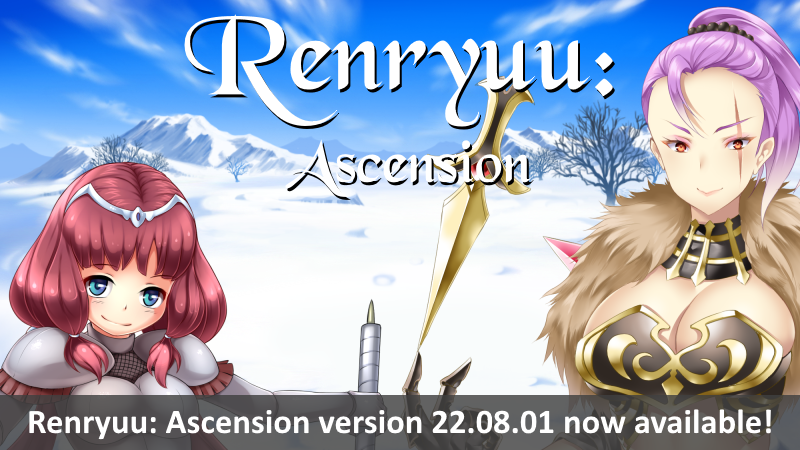 - The new quest "The Situation in Begus" starts at the desk in your bedroom now. It requires the events about Maria and your journey to the water temple island to fight Katreena, the events with Elly and Adrianna, the sex scene with Queen Jeanne, and that you use the teleport orb once after all of the previously mentioned conditions are met.

- After the new quest, you can talk with Adrianna again to get her CG scene.

- Added a replay option for Tami's cooking event, so that people can see the event with all party member choices.

- I changed the blue, yellow, and green buttons in Palasha's cave. They stay down while they're active now, and come back up when you deactivate them. This should make it easier to deactivate the grey crystal, since you can see which buttons are active.

I also left a (rather obvious) hint about the grey crystal.

- Changed the "Burn Magic" spell from the laboratory for Chiyo and Ryoko. The amount of burned MP now increases with the level of the user.

Umm i have a problem

My data has been gone just now i didn't repormat my phone nor i deleted it it's just gone i just played it this morning in 00:01am and now i open it it's gone i have all my glory back and again I'm on the start with nothing i got all the legendary weapons and my lvl there is almost 100

Can you add some strap on contents soon ?

Strange happened. When i update my pc version (as usual) with new files, nothing happened, its still 22.07.15 ver. I assume i should re-load whole game and import saves.

Have you checked if the new content is in the game? It might just be the new title screen image that is missing, and thus shows the old version number in the title screen.

No, i already reload whole game. my OLD version with new files had old title screen. Reload version already with new screen. nvm, i fixed this hard way. Maybe i should think about this earlier)

Wanting to check on a couple things, been trying to support you on subsribestar, what ID are you going by? Wanting to see if there's a way to get contact artists, maybe commissions, loved seeing the furry with two heads and hope she'd make an appearance in the Vanguard.

My SubScribestar page is https://subscribestar.adult/naughty-netherpunch

There is no reward tier for custom commissions on subscribestar, but you can send me a private message there to discuss your idea, so that I can say if it is possible and what it would cost.
I think you're also on discord? I remember seeing your name there. You can send me a pm on discord as well.

Got Discord situated and sent you a pm, didn't know if you wanted to share with others

I am also having the same problem.

And no, the contents stays the same.

having the same problem

Adriana's body is absolutely adorable. Also is the new quest part of the storyline that will lead to Ryoko and Elly's marriage?

Is that the next update or we'll get another in the middle?

I'm not sure yet, but it's possible that it'll be one big update at the end of the month instead of two updates with ~2 weeks per update.

i actually prefer one big one at the end but, you do you

THANK YOU I CONTINUE TO LIVE CAUSE OF YOU