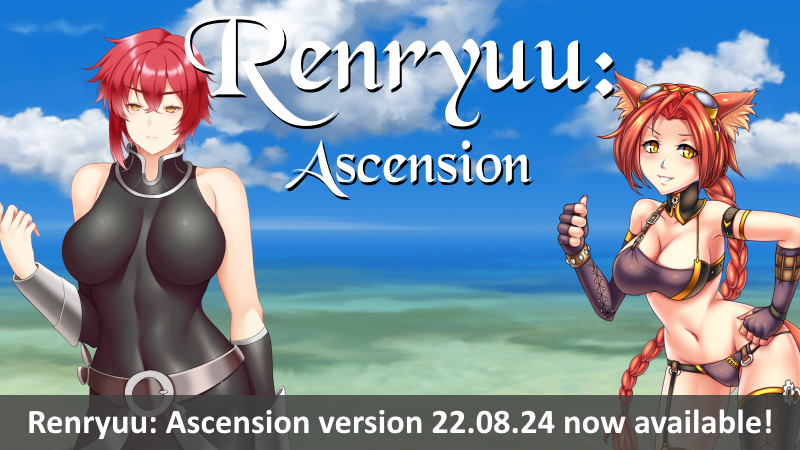 - New quest for Ryoko, which starts when you talk with her at the sleeping chambers. Requires the first meeting with Akai in the workarea near Aldlyn, Shey's event including her help for Maria at the Ironholm prison, that you defeated Raidy in the Spire of Courage challenge floor to get to the raid area, and that all previous events for Elly and Ryoko are done.

- The "Boulder Riddle Reset" key item, which you receive at one of the brexeet isles, is now automatically removed from your inventory when you walk out of the area, and added to your inventory again when you enter it again after the chest with the item was opened.

- Fixed a bug which caused the happiness value for Ryen to be wrong after entering the CG room under some circumstances.

Oh yeah i am using joiplay in android

It's a bug from the last upload. You can get out with the teleport orb.
I have fixed it for the next upload.

But how I cant get out

Thank god i am just used joiplay can be teleport

What hell where am i

First of all, I think realised a bug(?):
I just started playing the update and realised, that the achievement screen tells me I have 16 of 19 achievements. There are all 20 listed but it tells the max. Number of achievements is 19. And I am actually missing 4 (False Love, Stronger than Nature, Nature Raid and Polygamy). And I think found a typo at the achievement 'False Love'. In the hint is written 'love poitions' and I guess you meant potions.

Secondly: Nice job on this game. It is incredibly good and I really love it. I could write a lot about why I like it but I think I try to keep it short for now. I startet playing quite a while ago as a silent enjoyer but now that I wrote something anyway I wanted tell you how much I respect and appreciate your constant work and updates on the game and that you always kept up or even raised the quality. That's sadly something quite rare. So, good job and thank you a lot

HOLY CRAP DUDE, THIS IS INSANE