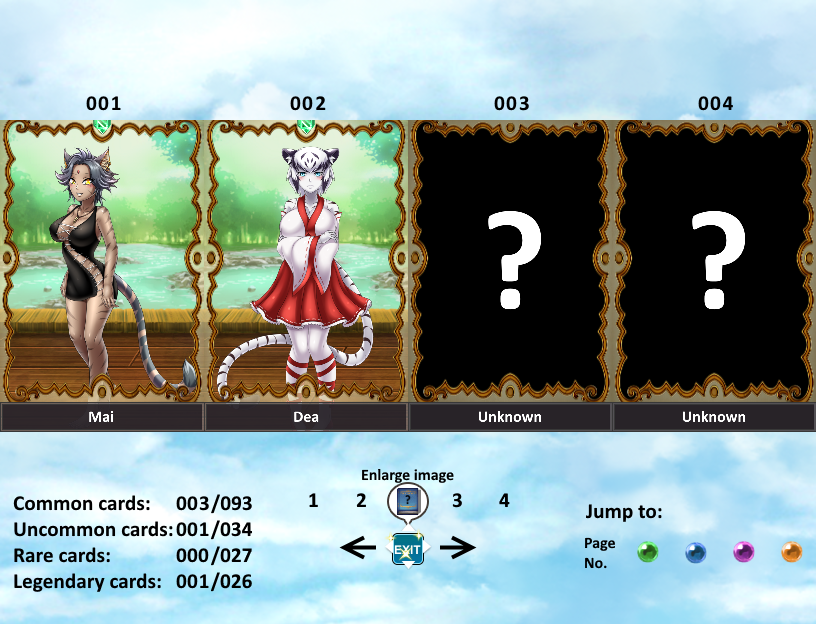 I made a quick new update, primarily to fix some nasty bugs, but it also includes a new card collection system.

- Added a card collection system with currently 180 unique cards of 4 different rarity levels. The events to unlock the system starts with an NPC in the store in Calterburry.

- There are three more traders for cards once the system is unlocked: In the castle library in Manastyr, in the herbalist store in Aldlyn, and in the north of Minsk Harbour.

[There is currently no reward for completing the collection.]

- Fixed the broken exit of the castle in Calterburry.

- When you have more than 1 Royal Coat, the additional coats are removed automatically when you enter the achievement screen.

- The numbers of achievements was corrected from 19 to 20 in the message when you enter the achievement screen.

- If you didn't unlock the CG scene with Ryoko and Mirel playing in the water at Amaranthe before doing the new events with Ryoko in which her body changes, the event will be skipped when you go to the location for it, but it'll still be unlocked for the CG room.

- There was a bug which allowed you to marry Elly before the new events with her and Ryoko, which included Elly's new animated CG scene. The bug was fixed, and you can talk with Elly to play the events and unlock Ryoko's class change, even after her marriage.

- The MP cost of the skill "Debug Attack" was changed to 0 MP instead of 1 MP. This way, Elly can also use the skill now

Please help me, I need an answer.

On other post i saw that for android update i just download the new apk. Install it. And it wouldnt erase the save file in the previous game ?

Im afraid of losing my save file. I've Been playing it 3days in a row 😅.

2. Im ended up already after the final battle quest. There is a note that the main story....

My question is...about the child. Is it already on the game or we have to wait for the update.

Thank you my king ryen

1. Yes, you can use the newer apk to update the game without losing your save files.

2. There is currently no pregnancy or childbirth. You only flag women as pregnant for now, and in future content a time skip will be added during and after which you'll see the results of what you have been doing before.

Are you planning on adding a feature where you can skip to the end of the latest update or a certain part of the game with whatever quest finished? Just Asking because I’m unfortunately using my iPad and every time It updates it doesn’t allow me to do the new quest and have to start over.

No, I have no plans for a content skip option. The only thing I can offer you is the debug attack skill you get from the cheat book in your bedroom, to quickly finish all non-event battles.

Oh okay no worries, and yea I use that but still takes hours to catch up but keep up the good work. Can’t wait for this masterpiece to finish.  👍🏼

How do you get the last few cards?

If you leave it to RNG/Chance it makes it highly unlikely to get them. 1 in 162000 or something like that... I think

I managed to get all but 2 of them and must have tried 100 times after the last card gotten and got no new card so far. The less of them I have left to get, the less likely it is to get them. "Needle in a hey stack"

Yeah but you get the card dust so you dont have to spent money and eventually you can go like 5 or 6 consecutive tries without spending money, I have noticed that the merchants on Aldin and Minsk ask for 10k more but you get cards with higher rarity more often so try that, after spending a little less than 5 million I have managed to complete the set in just one afternoon so its not impossible just resource intensive and time consuming

No freaking way, we're getting a pokedex