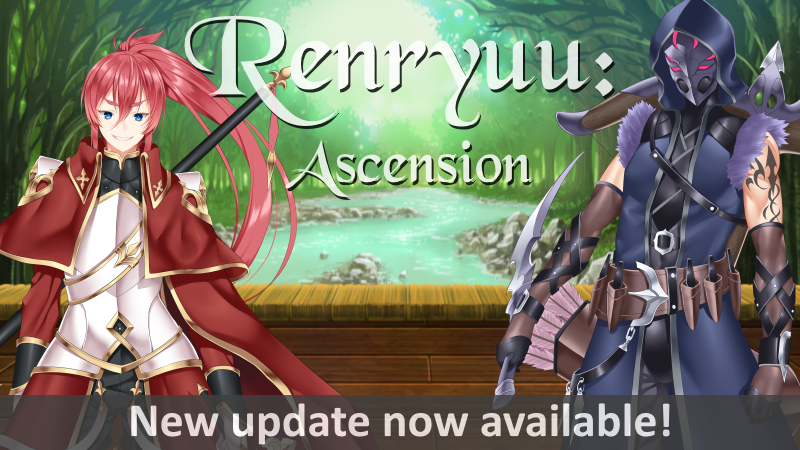 - New quest "Bee Infestation" available via the Aldlyn city board after you had the Thremten festival events and the events with the Dark Sorceress to know about the dangerous forest near Thremten. After this quest, you can advance the events with the bee girls to get their CG scenes.

- New quest "Vegetables Request" on the Aldlyn city board. Requires Sandra to be in your party. This quest brings you to the swamp south of Bitterroot Farm, to ensure that you find the chest for Sandra's events.

- New option in the dialog with Lady Akira in the bathouse to change your choice about Grey's transformation if you picked to return him to his male shape earlier.

- A new sparkling event in the tent where the game starts allows you to toggle the "colorblind mode" on and off now. This mode adds white letters on top of colored switches, levers, and crystals in areas where the color is important for riddles, so that colorblind people can solve them as well.
(This mode doesn't change anything for objects where the color isn't important for a riddle. If you notice a riddle I forgot to upgrade with this mode, please let me know.)

- You can now recruit Della as vanguard leader for a gun squad. The events start with a dialog with Cassedy in your sleeping chambers, after which you get the quest "The First Gun Squad."
During this event, Della will be marked as "not recruited yet" if you used the cheat book to activate her earlier, but she will keep her level, skills and stats when you recruit her again.

- The CGs for Mary's scene, Ryoko's scene in the clinic, and Sandra's first scene in the underground have been re-made to improve the art. All new and old CGs can be seen in the CG room.

- The option to send the 4 slaves Grime, Miyako, Chieko and Glyntris to another country, or to set them free, when you buy them, was removed. If you picked either of those two options in the past, you can find the four girls in different places to fix your choice for them.
Grime - Thremten, top right corner.
Miyako - Havaria Port, below the dock to Amaranthe.
Chieko - Bottom of Witton, near the empty tent.
Glyntris - Parverhill, top left corner.
The dialog for this event is very short, since it's more a "fix" than new content.

- The placeholder character sprite for Della and her vanguard squad were changed to the proper images.

- The messages for exp. gained and level ups for the academy now shows the name of the squad leader instead of the squad number.

- The loot chest in the arena for vanguard squads is now special and can be opened by every squad. The lockpick ability is not needed for this chest.

- In the arena battles, your turn now automatically ends when your AP are at 0 after an attack or movement.

- In the arena battles, the blue movement tiles now automatically appear for the active squad at the start of a turn.

- The "Turn X" message which appears at the start of turns in vanguard battles now automatically disappears after 1/4 sec.

- A bug was fixed, which caused enemy squads not to attack flying squads when they were above unpassable terrain.

I had a problem with the arena last time I tried it. For some reason after I won the match I couldn't leave it. Has this been patched yet? I'm playing the android version by the way.

If it was in the previous version, then it might be fixed now.

Hey, I love the game but why does it end everytime I hire fane as a maid?

I found a typo or something like that, when I equip the good light armour on Della, the game still says that the Plain Light Armor is fitted, but I can clearly see that the green armour icon changed to blue which means I still get the bonus defence... it's just a minor bug

Can you see if you could make a scene where you save the ant slave and a phonics girl too?

Help I can't find the bees.

Nvm, I just looked in the wrong area

DUDE I LOVE THIS