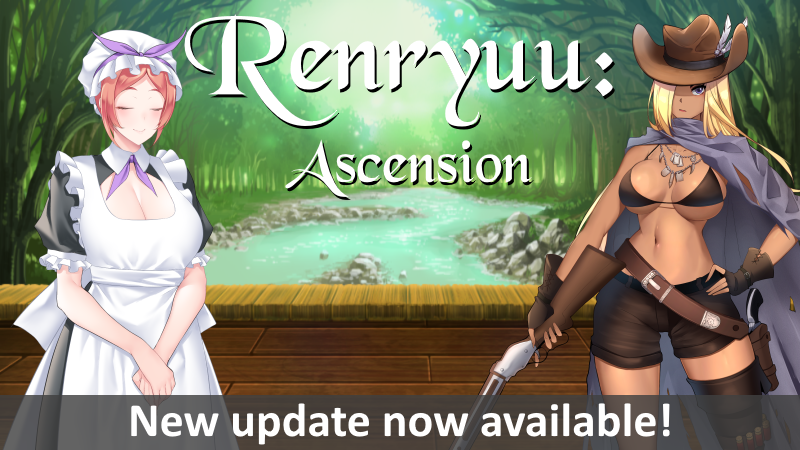 - For those that haven't seen my previous post, I created a wiki for the game at https://renryuu.miraheze.org/wiki/Main_Page
The wiki is still not fully finished, as many characters and locations are missing, but it already has a bunch of additional details that the walkthrough doesn't offer.
Apart from the main page the entire wiki can be edited by everyone. Which means people can directly add details themselves when they notice that something is missing or unclear.
Any help to improve and expand the wiki is appreciated!

- The vanguard leader Della now has new events and a CG scene. The last step of the dialogs requires that Della's squad is level 7 or higher.

- Change to Della's aiming mini-game: Every few movements, the aiming image is certain to go to the middle of the target.

- New ability "Alchemist" for Chiyo after the events about the alchemy equipment for her. When you're past those events in Chiyo's story, she automatically learns the new skill when you talk with her in her sleeping chamber.

"Alchemst" replaces the dialog option for crafting, and allows you to open the crafting menu anywhere while you're out of combat.

- Removed the word "Equip" from the choices when you change weapons, armors, or horses for vanguard squads, as the text was too long in a few cases.

- The CG image in Mary's CG scene doesn't stay on the screen anymore, and the first image is now the updated CG art version.

- The "Black Twin Towers of Honor" can now be build! A dialog with General Günther about these towers becomes available when you use the teleport orb after you recruited all party members and finished the first floor of the Spire of Courage.

The construction will be a big project with three increasingly expensive phases.

In the tower itself, you can take three types of daily quests: Hunting, Fighting, and Speed.
You can also do a solo challenge with each party member, which gives the character either a new skill or increased stats at the end. Most challenges usually have some sort of gimmick.

About the daily quests:

- The Fighting quest has a different buff/debuff depending on which day it is:

Monday: Everyone is confused and does random attacks at random targets in every battle.

Tuesday: All party members have only 1% HP but +70% magic and physical evasion.

Thursday: MP cost for skills *5 but the TP gain rate is tripled and TP is preserved between battles.

- The game checks what day is set in your system when you enter the tower, which means you have to leave and re-enter the tower when you want to update the day.

- When the date changes while the game is running, it might be necessary to restart the game before it'll recognize the new date when you enter the tower.

- You can do the daily quests more than once per day, but you'll get the full reward only once per day. A red orb turns green when the quest is done for the current day.

He's in Havaria Port, next to a tree.

I think there was a problem with the download cause the scene with gun squad girl gave an error as well so i reinstalled it and now they both work. Maybe it didn't download properly or something.

How do i transfer my progress to the newer version?

I can't get lind thigh job scene is there something I'm missing?

Because I have everything I need for it

I have female soldiers enabled and payed the amount

After giving Lind the money, it takes some real time while the game is running until her event advances and the "upgrade" is done.

While this is a fantastic game, there is 2 issues that need to be addressed

1: kurohime needs an alternate route to get her as a vanguard leader because currently the only way to do this is by starting a war with Dorgania. This is a problem because it forces a choice between getting every sqad leader and not starting a war.

2: the second problem is with Sandra's marriage quest. In the dungeon after the puzzle with 3 different sized trees, the red button switch sometimes doesn't come back up when it's supposed to. This forces the player to completely reset the dungeon which causes any enemies that may have been cleared to respawn which in turn makes it necessary to clear them out again so they don't get in the way.

Other than that, this game is absolutely perfect.

1. That's not fully correct. You need to tell Theremis to prepare for a possible war with Dorgania. You don't and can't declare war yet. War will be an option later in the time skip events of the main story.
The choice to prepare for a war will not force you to declare war later.

2. That issue was already adressed and fixed in a previous update. You can interact with the switches when they're stuck in the ground to pull them back up.

Hope that helps to make the game fully perfect for you. ;)

Yo...king saotome :D (Thanks for the great game !!). I have  a question about the storry quest (quest : Last Chance)  this quest can't be advanced yet right?? But, What happened if I'm doing the side quest "Amagal succession" and choose to support Varrea become new ruller of Amagal ? Cause when i try talk to varrea (when she at amagal castle) there's no option about " last chance" quest like before she move in to amagal castle( like when she still at aldlyn sleeping chamber) can i still go with the storry latter or just ignore the side quest "Amagal Succession" until the next update ?

Thank you (sorry for my bad english)

Don't worry, you'll be able to advance the main story regardless of any other content or choices you do, once the story continues.

Where can I release Jiangshi? I have caught 1 Jiangshi and now I can't release her at castle, big farm nor whisperwind farm. Thanks for read my questions.

At the graveyard. The graveyard can be build on the country overview map.

Thanks. Love you and your game.

Help, what do I do for Ryoko's solo challenge

I don't think I can get her stronger through weapons my next strongest axe gives +9 attack, and I'm pretty confident I've exhausted all attack ups. I'll keep searching for a way though.

Used Spartan Highkick boots. Might've had to restart the game without them. Might replay anyways.

just starting for the first time. something that really bothers me (and this very well could be only me) but i feel you need to establish the setting more at the beginning. particularly where are u at the start, is that a military camp, a school etc.

and u should establish Ryen's character more as well. he just decides to become a king without a second thought or considering that the other's at the camp or whatever it is will wonder where their ace disappeared to.

I feel like there's A LOT of story that's missing here...and it's distracting enough for me to stop playing and make this comment

Where do i find della after her first encounter of her, i cant remember where she stay

Did you recruit her as a vanguard leader? Then she is in the barracks of the vanguards, where Jessy and the others are as well.

I done Chiyo' quest so from now on i can open the crafting menu anywhere right? But i can only find crafting menu when i talk with Chiyo in her sleeping chamber

There was a bug, which prevented people from getting the new skills. I uploaded a fixed version a little while ago. When you're on windows, you can use the update files to quickly add the fix to your game. Then you should be able to get Chiyo's Alchemist skill as intended.

does this count for steam?

The Steam version was also fixed. Your game should update automatically (or maybe you need to restart Steam)

FINALLY THANK YOU SO MUUUUUUUUUUUCCCCCHHHHH

I could have literally screamed with joy as soon as I saw the update. Let's hope we never have a 2 month hiatus again.